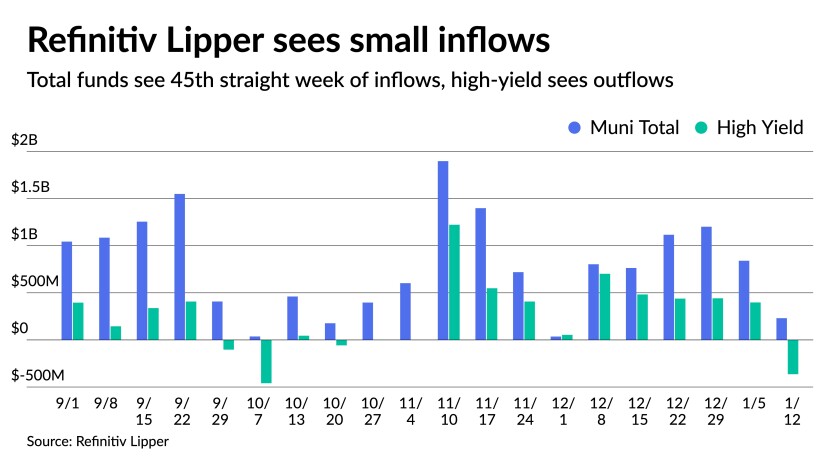 Municipal benchmark yields were steady to firmer by a basis point 10-years and out Thursday as U.S. Treasuries were stronger and equities sold off led by tech stocks.

The municipal primary dominated the day with several large deals pricing. The correction to higher yields over the past week is allowing investors to be more selective with credits. Chicago schools saw 10- to 20-basis point cuts from price talk circulated Tuesday, showing investors demanded more for the junk-rated credit now that all municipal yields have climbed into a higher range.

Fund flows back this up with Refinitiv Lipper reporting $231.1 million of inflows but $363.8 million of outflows from high-yield, the first since mid-October and the last correction, showing further indications that high-yield was hit hardest, creating more selective investor sentiment.

In the primary, Goldman Sachs priced for the Board of Education of the City of Chicago’s (/BB/BB+/BBB/) $866.12 million of dedicated revenue bonds.

Final pricing was not yet available at press time.

It may seem like a slow start to the new year, but the overall pace of the municipal market is brisk, and Thursday’s firmer tone helped support secondary market activity and new-issue demand, according to a New York trader.

“I think the municipal market is still trying to get its feet under it with the new year starting; this is the first real week of any supply,” he said.

There is definitely improvement from earlier in the week, when municipal yields rose by three to six basis points on Monday on elevated selling pressure, while short U.S. Treasuries also saw pressure, he noted.

“I think munis are reacting positively to the firmer tone in Treasuries today,” he said, adding that investors don’t like “choppy” markets. “The recent volatility was definitely putting people on their heels.”

On the buy-side, municipals’ strong fundamentals and historical high quality is keeping the asset class supported as the first quarter gets under way, according to Joe Boyle, fixed income product manager at Hartford Funds.

While the previous strong demand that drove the municipal market in 2021 has waned slightly as the increase in individual taxes may be less severe than first expected, municipals continue to have a positive backdrop compared to the negative backdrop in other traditional fixed income classes on the back of rising rates, Boyle said.

“Muni markets relative to traditional core had a strong year and investors likely want to lock that in,” he said. “Demand for total return will exist in fixed income and investors are turning over every rock.”

CUSIP requests decline in December
The aggregate total of all municipal securities — including municipal bonds, long-term and short-term notes, and commercial paper — fell 10.6% in December versus November totals, according to CUSIP Global Services. On an annualized basis, total municipal CUSIP identifier request volumes were down 5.8% versus 2020 totals. For muni bonds specifically, there was a decline of 12.7% month-over-month and requests fell by 2.6% overall in 2021.

“Although municipal request volume has slowed year-over-year, we’ve still seen an incredibly strong appetite for new issuance among equity and debt market participants in 2021,” said Gerard Faulkner, director of operations for CUSIP Global Services. “The combination of a favorable interest rate environment and relatively healthy markets suggests this trend will continue through the early part of the New Year.”

Treasuries were better and equities sold off.

More inflation data
While producer prices just missed most expectations, the numbers remain high, including the annual rise in the measure, which was the highest December to December climb in history.

“In the near-term continued supply bottlenecks and mounting labor and input costs are likely to continue to put upward pressure on prices, while the Omicron variant and associated surge in COVID-19 cases may further skew inflationary risks to the upside,” said Berenberg Capital Markets Chief Economist for the U.S. Americas and Asia Mickey Levy.

“There are some indications goods inflation is easing: on a three-month annualized basis durable goods prices rose 4.8%, a sharp decline from July’s 11.2%,” he said. But as supply issues ease and the pandemic dissipates, he expects demand for services will climb and “lead to a further moderation” of rising goods prices.

Most analysts expect inflation to slow later this year, as does Gary Schlossberg, global strategist, Wells Fargo Investment Institute. “However, the real test for the market is whether or not they will be satisfied with a disappointingly flat trajectory lower, as rents and other services prices pick up some of the slack from slowing goods costs,” he said.

Fed Gov. Lael Brainard, much like Fed Chair Jerome Powell, who testified on Tuesday before the Senate Banking Committee, “continued to reinforce a message of the Fed’s diligence toward inflation and employment,” said John Farawell, managing director and head of municipal trading at Roosevelt & Cross.

“Acknowledging these trying times for the economy she tried to communicate the central bank’s role in battling inflation and supply change issues in a non-partisan way. This wasn’t easy as politics seemed to continue to be part of some of the committee’s agenda.”

Despite the politics, he said, Brainard responded in “a competent manner.”

Bond yields, Farawell said, “will signal what the market thinks about the future economic trends and inflation.”

Inflation has become the second biggest concern of CEOs, according to The Conference Board, with 55% of surveyed executives saying they believe inflation will persist into 2023 and perhaps beyond.

Brainard said inflation is too high and the Fed is determined to reducing price pressures. “Our monetary policy is focused on getting inflation back down to 2% while sustaining a recovery that includes everyone,” she said. “This is our most important task.”

Sen. Pat Toomey (R-PA) noted Brainard opposed the easing of financial regulations and took an “activist role” in environmental issues. Brainard was also questioned by Sen. Thom Tillis (R-NC) about her contribution to Hillary Clinton’s presidential campaign, which he said didn’t mesh with the Fed’s independence. She responded, had she known Fed officials rarely make political contributions she would not have given the money.

“The most visible takeaway from Brainard’s remarks,” said Wells Fargo’s Schlossberg, “was the shift from promoting growth to containing inflation. The shift by one of the Board’s most dovish suggests greater unanimity in the policy tilt from growth to inflation control.

The bond market rallied, he said, “given the stronger commitment to controlling inflation,” while stocks slipped as investors’ expectations tilted “a degree or two toward more aggressive rate increases.”

But the Fed’s “hawkish slant” will be pressured, Schlossberg said, “both by an unfavorable combination of slowing growth and persistent inflation pressures, as the economy feels the brunt of the Omicron outbreak on the reopening and supply-chain disruptions.”

And Brainard’s comments could provide a “counterweight,” should President Biden’s nominees to fill the three empty Fed seats be dovish, as expected, he said, as they “will face resistance at the policy deliberations from a more hawkish rotation of bank presidents to the FOMC.”

Federal Reserve Bank of Philadelphia President Patrick Harker said he expects three rate hikes this year, beginning as early as March, and possibly a fourth if inflation continues at an elevated pace.

“The inescapable logical conclusion of this situation ― inflation higher than we want and a very robust jobs market ― is to tighten monetary policy,” he said according to prepared text of a speech released by the Fed. “I expect us to complete our taper of asset purchases by March. Then, we can probably expect a rate hike of 25 basis points. We could very well continue to raise rates throughout the year as the data evolve.”

Federal Reserve Bank of Richmond President Thomas Barkin hedged on when he expected liftoff, saying the Federal Open Market Committee “will be free to begin normalizing rates, should circumstances support that” once asset purchases end in March.

Inflation will determine the Fed’s moves, he said. “The closer that inflation comes back to target levels, the easier it will be to normalize rates at a measured pace,” Barkin added. “But were inflation to remain elevated and broad-based, we would need to take on normalization more aggressively.”

Economists expected 205,000 claims in the week.

“This may well be the first report suggesting Omicron is leading to new job loss,” said Mark Hamrick, senior economic analyst at Bankrate. “The future path of the pandemic remains highly uncertain, but the underlying job market narrative overall continues to be one of scarcity of available applicants and workers.”